The fatal blow was definitely not the first hit. Icebergs plowed over Mooring SF1, again and again, for thirteen months. Every few weeks, SF1’s underwater apparatus of scientific instruments was pushed towards the sea floor by a passing iceberg. Usually, these chunks of ice – sometimes as tall as a skyscraper and wide as seven city blocks – would hold SF1 down for several hours and then move along, allowing SF1 to bounce back up resiliently. 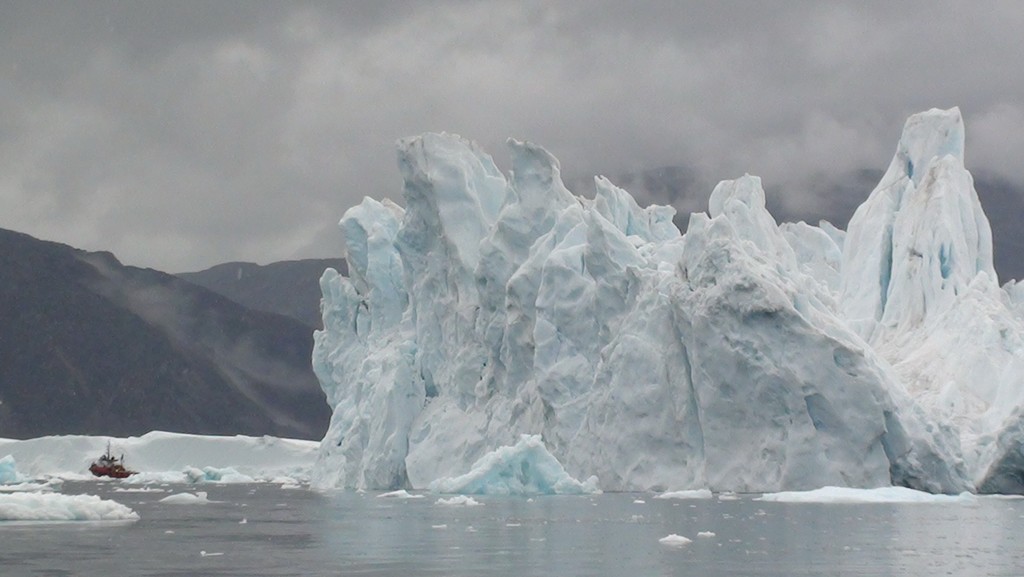 An iceberg near the site of SF1 in Sermilik Fjord, next to the M/V Viking Madsalex (which, for scale, is 82 feet long).

While this may not seem like a safe location for scientific equipment, our research group deliberately placed SF1 in the line of iceberg fire. In the summer of 2011, I traveled to Greenland with scientists Fiamma Straneo and Dave Sutherland to deploy SF1 in one of the country’s many fjords – narrow inlets in the coast, abutted by steep cliffs. At one end, the fjord connects to the open ocean; at the other, a vertical ice face, the terminus of Helheim Glacier, forms the back wall. This fjord is long (60 miles), narrow (4 miles wide) and deep (1⁄2 mile). You would need to go hundreds of miles off-shore of New England to reach water this deep. But in Greenland, the cliffs that line the fjord extend underwater, forming deep underwater canyons that connect the open ocean to marine-terminating glaciers.
It is in this deep water near Helheim Glacier that we assembled Sermilik Fjord Mooring #1 (hence SF1). Setting up a tower of instruments underwater, off the side of a ship, is no small feat. We started by surveying the sea floor with an echo sounder. Then, piece by piece, we connected and snaked out the parts along the water’s surface, starting from the top: floats, wire, instrument, wire, instrument, wire, instrument , and so on. Last, the anchor was attached to the whole contraption and dropped overboard. As it fell to the sea floor, the anchor pulled the string of equipment into the fjord’s abyss. If all goes well, the anchor ends up at the bottom with instruments strung above in a vertical but flexible structure. 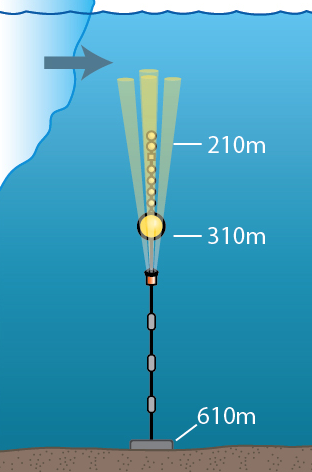 Schematic of SF1, including the acoustins beams of the ADCP which measure velocity, and a passing iceberg.

The lower half of SF1 looks like a standard oceanographic mooring: a heavy anchor with chain and wire leading up to instruments that measure temperature, salinity, pressure and velocity. But unlike many moorings, there is no buoy at the surface. The mooring ends hundreds of meters underwater with a buoyant float (an orange, metal sphere) that holds the whole apparatus upright. The mooring is specially designed to stop short of the surface to reduce – but inevitably not avoid entirely – iceberg collisions. 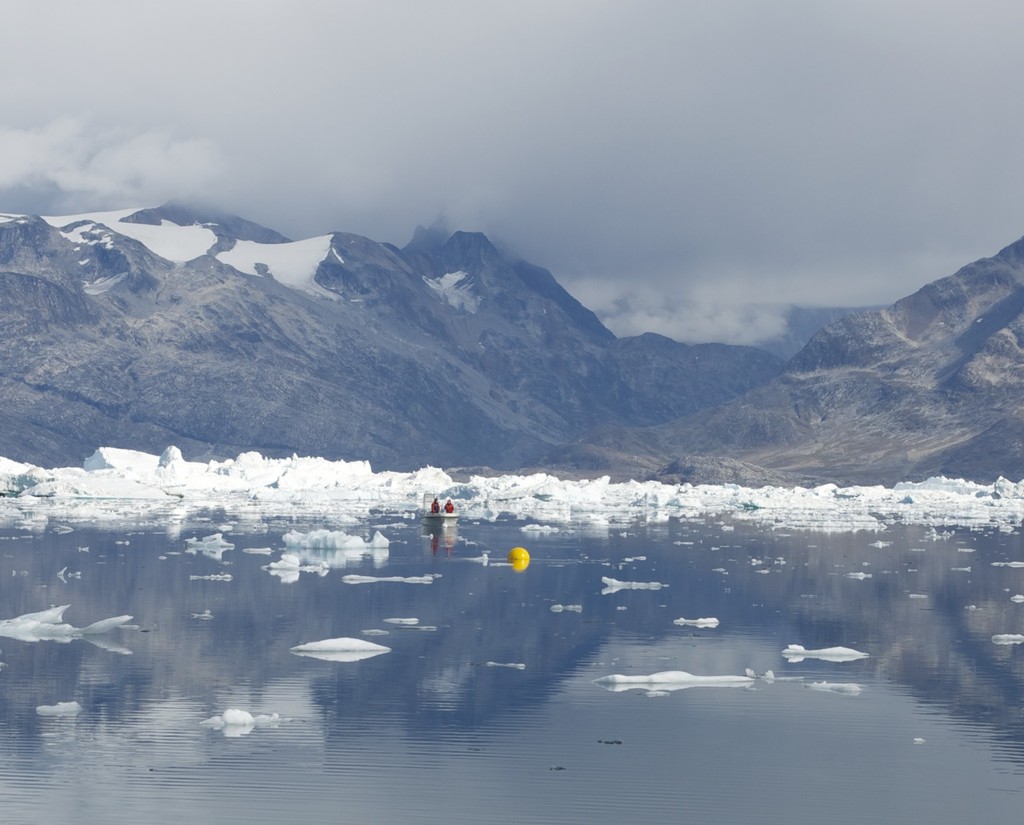 The sphere of SF1 during deployment, before attachment of anchor that pulls the whole mooring underwater.

The icebergs transiting down the fjord are fragments of Helheim Glacier, one of the slow-moving ice rivers that drain the Greenland Ice Sheet into the ocean. The past decades saw an acceleration of many glaciers, including Helheim which almost doubled its speed, and increased surface melting at the ice sheet’s margins. Both effects cause the ice sheet to shrink and sea level to rise. Currently, the changes in Greenland increase sea level by 0.3 inches per decade, accounting for a quarter of total sea level rise. Our ability to project future changes in sea level, however, is hindered by our inability to predict glacier behavior. Scientists largely understand the surface melting piece: air temperatures warmed, causing more ice to melt at the ice sheet’s surface. But why did the glaciers accelerate?
Scientists have noticed a link between glacier behavior and ocean changes and have hypothesized that warmer waters increased submarine melting and triggered glacial acceleration. Yet we know almost nothing about the water in Greenland’s fjords – the water in direct contact with glaciers – or how it varies. All measurements of warming trends around Greenland have been made outside fjords, far from the ocean/glacier interface. Some scientists have begun studying these fjords by making measurements during summer surveys. But just as recording the weather in Boston for a few days during the summer will not tell you much about Boston’s climate or temperature fluctuations, neither will snap-shot surveys of fjords tell us about temperature variability near vulnerable glaciers. So our research group designs mooring to leave instruments in fjords throughout the year, measuring ocean currents and water temperatures that drive melting near the glacier’s edge.

Thirteen months after SF1’s deployment, we headed back into Sermilik Fjord on the M/V Fox.  As we discovered much later, it turns out that while we were steaming north towards our site, a particularly large iceberg moved over SF1. It held the mooring down for several hours and then continued its journey out of the fjord. But this time, the mooring did not spring back up. The top float, the buoyant orange sphere made of iron, was designed to sit 310 m below the surface and to withstand the immense pressure at this depth. However, when this iceberg pushed the sphere down to 450 m below the surface, the metal sphere collapsed. It imploded, crumpled like a used paper cup, under the weight of a quarter mile of water. Having lost its buoyant sphere, the entire structure – instruments, wires, floats and all – plunged to the seafloor.

Meanwhile, aboard the M/V Fox, we turned around. We had no inkling of the misfortune befalling SF1, but we were simultaneously experiencing iceberg troubles of our own. The ice pack in the fjord was dense, and our large boat could not maneuver through the icebergs to reach the upper fjord. So we turned south, abandoning hope of recovering SF1 until the next year. We did recover several other moorings from safer locations in the lower fjord, far further from the glacier, before heading home.

One year after SF1’s collapse and two years after its deployment, we returned in a smaller boat, allowing us to sneak through the ice, and we arrived at the site of SF1 on August 22, 2013. With our acoustic pinger, we communicated with the mooring and told it to release, but, sure enough, with an imploded float and no buoyancy, the mooring did not come zipping to the surface. We were not, however, ready to give up on SF1. If successfully recovered, the instruments would give us records of temperature and velocity that were much closer to a major glacier’s terminus, and far longer, than any previous measurements. 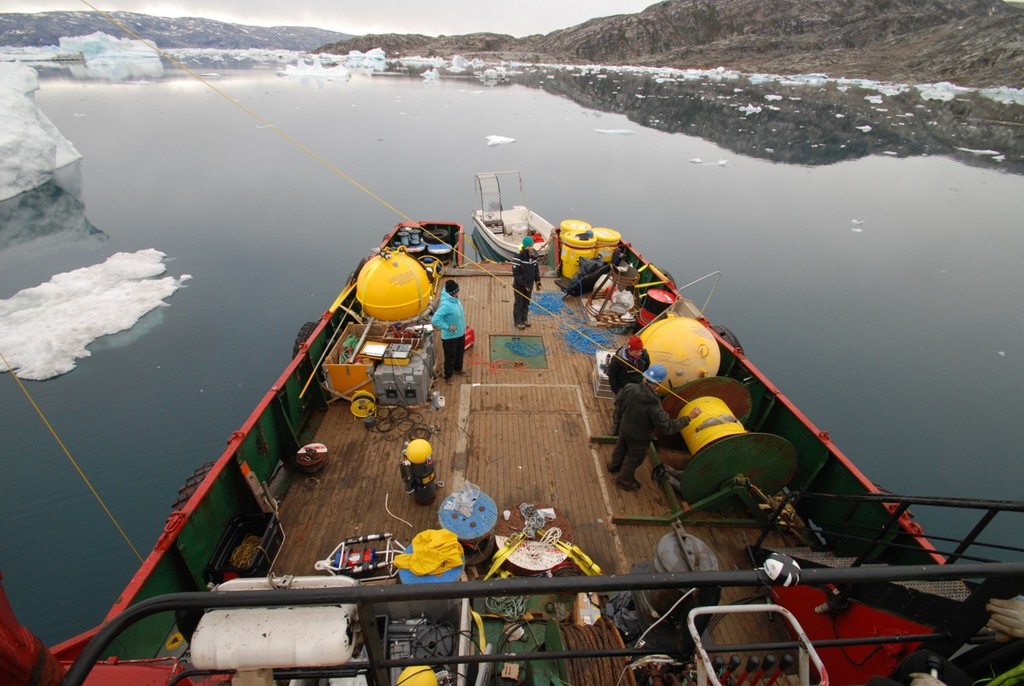 Luckily, mooring technician Will Ostrom had prepared for this. He had brought along a custom set of grappling hooks and a plethora of chains, weights, rope and wire. We were going to go fishing for our mooring.

When deployed upright, the mooring is an impressively large structure. But crumpled on the sea floor, this endeavor is equivalent to fishing for a lost bracelet at the bottom of a swimming pool with a string and hook in the dark. We better know exactly where it is.

So we started by surveying the area with our acoustic pinger, which reports the range between our boat and the mooring and allows us to triangulate a more precise position. This is no exact science, though. We lowered an anchor down at our best-guess location. Then we steamed away from the center of our target zone as we spooled out chain, hooks and weights. Once these were lying on the sea floor, but still connected to the ship with a rope, we drove in a wide circle, sweeping the mess of gear along the sea floor in hopes of hooking a piece of the lost mooring. Then the dragging gear was pulled back in to check for a catch. We tried this several times until we had to quit for the day, tucking the ship into a small inlet off the fjord to sleep away from icebergs.

Early the next morning, we tried again, with more weights and hooks this time. We swept an even larger circle, all the while dodging and circumnavigating icebergs. As we were about to give up, the wire tightened, heeling the boat to its starboard side. We had caught something. As we hauled in, SF1 surfaced, piece by piece, tangled up in our dragging gear. Last into the ship’s deck was the rusty, imploded, orange sphere.

Despite being crumpled on the seafloor for many months, SF1’s instruments gave us records of water properties and velocity, spanning from the time of deployment until the fatal iceberg hit, and they provide us new insight into ocean currents and temperature variability near Helheim Glacier. Our findings from this mooring (to be discussed in a future post!) contribute to one piece in a complex puzzle of ocean/glacier interaction, which itself is one component needed to predict sea level rise in the future. To get more answers, we keep putting moorings in the line of iceberg fire, inching our way towards the glacier and an understanding of what happens where the ice sheet meets the ocean.