Daylight is long gone in this village on the southeast coast of Greenland, leaving the afternoon pitch black. A fresh layer of snow from the morning covers the ground, reflecting the darkness around it. The vacuum of space is clear and stars glint behind snow-covered mountains.
But there is nothing romantic here.
The temperature plummets to minus-four degrees Fahrenheit and is still falling. Suddenly the wind picks up and in an instant the silence is gone. Village dogs start barking furiously. Icy gusts whistle through the spaces between the boards of the wooden huts, a banshee-like warning of the bombardment to come: ice balls, rocks and untethered sleighs, anything that isn’t nailed down.
By now, every creature in Tasiilaq knows: A piteraq is colliding with the town, and going outside into the elements would be suicide.

A piteraq – an Inuit word meaning “ambush” – is a sudden, strong and cold wind that emanates directly out of a fjord, the steep-sided glacial inlets named by the Norsemen who made landfall here in the 10th century.  Piteraqs haunt Southeast Greenland in all seasons but summer, with anywhere from two to 15 icy blasts a year. In Tasiilaq’s case, the fjord is the nearby Sermilik, a river that connects the local glacier – Helheim Glacier – with the ocean.
Not all piteraqs are as devastating as the one in 1970 which was one of the worst with estimated wind gusts of 72 m/s (160 mph), savaging Tasiilaq into near-ruin. After this storm a warning system was created. Whenever a piteraq is forecast to hit the town an alarm rings, resulting in a complete shut-down for about two days.
During piteraqs, cold air – more a victim of gravity than hot air – thunders down the steep slopes of the mountains and buries everything in its path beneath an avalanche of freezing, sometimes hurricane-force wind. A tell-tale sign that a piteraq is coming is that the sky becomes suddenly clear which indicates that the wind has changed direction and is now coming from the mountains and the vast ice sheet behind.
While the air over the Greenland ice sheet is very cold, the air over the island nation’s ocean to the southeast is much warmer. This warm air rises, and the cold air flows from the land toward the ocean, replacing the rising air. In the morning, as a result, the land warms up faster than the ocean and the wind blows offshore, as in most coastal regions. In the evening, the opposite: the land cools faster than the ocean, triggering a wind that travels toward land.
With only gravitational and thermal forces, air would constantly flow down the ice sheet. Where Tasiilaq differs, however, is that its regional wind speeds are highly variable. Sometimes, the air atop Sermilik Fjord is cooled down without sliding down the slope and a reservoir of it builds up over the ice sheet. The cold air is then suddenly released when a cyclone – a vortex of vertically rising air – passes by. When the center of the cyclone is near Tasiilaq, the winds are calmer and snow is falling.  As it moves away, it creates a flow from the ice toward the ocean and pushes all the reservoir of cold air downhill, releasing its bitter stockpile like a broken dam.
When the cold air rushes downhill something fascinating happens: A wave breaks in the atmosphere! Like a water wave breaks when it rolls onto the beach, the wave of cold air in the atmosphere can overturn when the air dashes down the steep slopes. The wave in the atmosphere exists due to the layering of the air: the densest air is at the bottom and the lightest at the top. Since you cannot ‘see’ this layering, the wave in the atmosphere is invisible. In contrast, you do see the boundary between the water and the air at the surface of the ocean, and thus you can see the wave that rolls onto the beach. When the wave breaks in the atmosphere, it mixes the layering up and extremely fast winds emerge underneath. This is also what happens during the disastrous wind storms in Boulder, Colorado!
In Tasiilaq, the wind travels especially fast because the town is located inside a valley, funneling the flow of air into a smaller and smaller space, increasing its velocity over the ice sheet toward the fjord. By the time the air reaches the fjord, it shoots out at top speed. And it does not stop there: The flow carries the cold air and fast winds far past the coast. It turns out that this has important consequences for the ocean and the sea ice at the coast. What exactly the winds do to the ice and the ocean will be addressed in another blog … 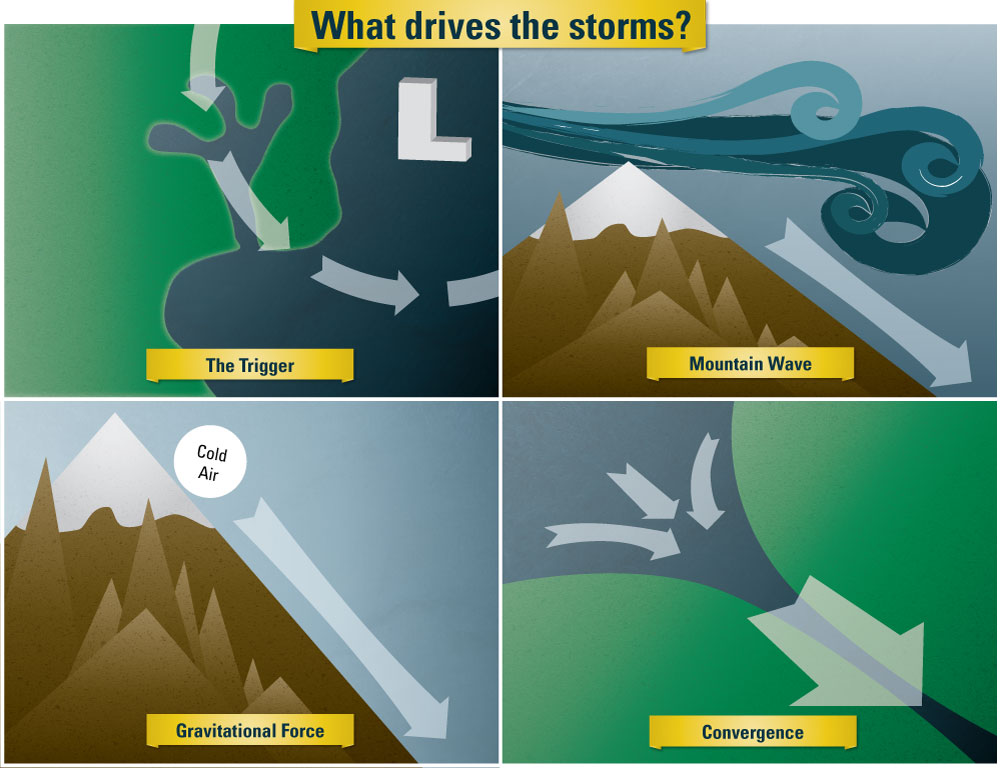 Driving mechanism of piteraqs: A low pressure system drives a wind over the mountain and down the coastal slope. This triggers a breaking wave in the atmosphere – similarly to the breaking of a water wave that you can see at the beach when the wind is strong. When the wave breaks it fuels the winds underneath. In addition, the air over the ice sheet is cold and heavy and thus it ‘falls’ downhill. It accelerates even more when it is funneled by the valley.

This post is, in part, based on a longer article which was written in collaboration with Noah Hoffenberg and will appear in the Oceanus Magazine. For more science background on piteraqs check out this article in the Journal of Climate.