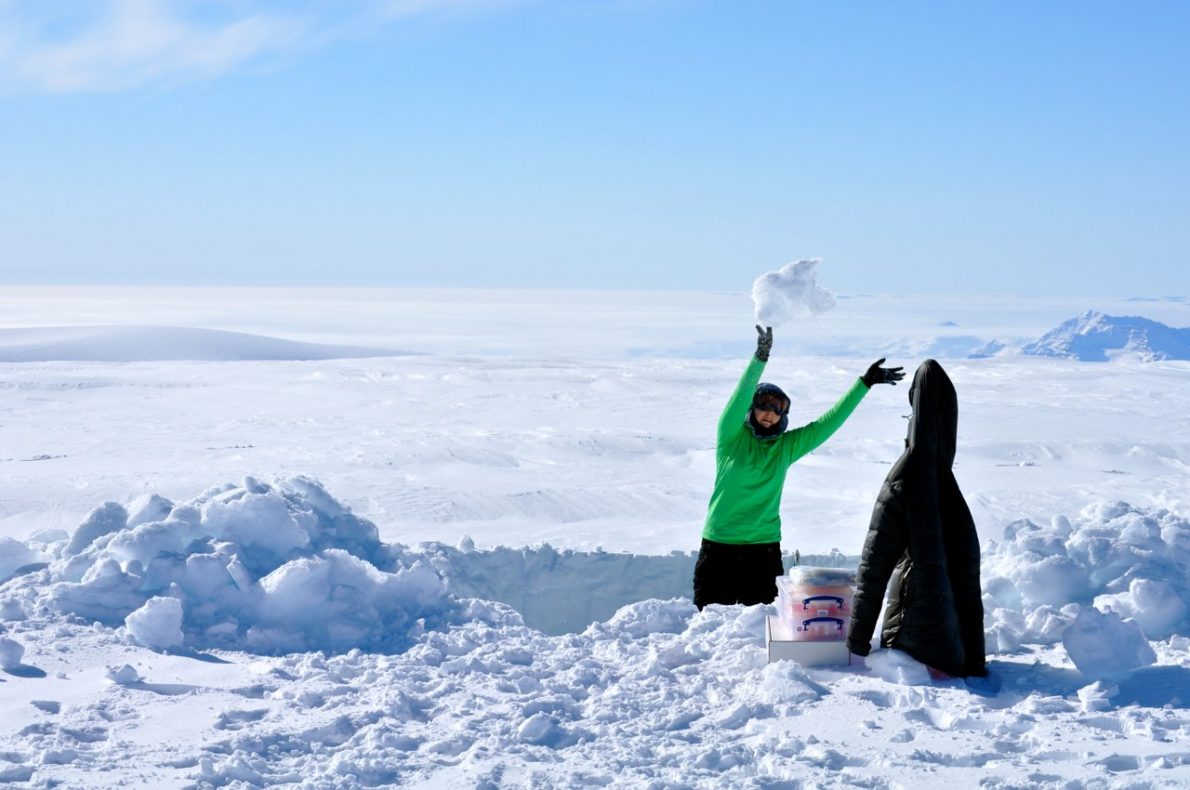 The Greenland Ice Sheet gains mass in the winter through snowfall and loses mass in the summer through surface melting and icebergs calving off the edge of the ice sheet. If summer melt and calving outweigh snowfall within a year, the Greenland Ice Sheet loses mass to the ocean and contributes to sea level rise. This is what has happened over the past couple of decades, when Greenland Ice Sheet changed from a balance between annual mass gains and losses, to an imbalance of losing more ice in the summer than snow accumulates in the winter, increasing global sea level by roughly 0.3 mm each year. This imbalance is caused by an increase in summer melting and increased calving of icebergs at the ice sheet margins. While the Greenland Ice Sheet mass loss and gain is largely controlled by global climate, the precise mechanisms and relation to oceanic, sea-ice and atmospheric forcings are partly unknown. One outstanding question our group is setting out to answer is how sea ice variability off the western coast of Greenland affects accumulation at the region’s coastal ice caps and Greenland Ice Sheet.
In April of this year, a team led by principal investigators Sarah Das (WHOI), Matt Evans (Wheaton College), Karen Frey (Clark University), and Ben Smith (University of Washington) traveled to the West Greenland coast to collect ice cores. These will give us a measure of how sea ice variability from the late 1970s to present has affected accumulation, and hence the nearby coastal ice cap. Ice cores record winter snow fall and summer melt in annual layers, which allows us to look back in time too see what a location's accumulation rate was in the past. The most recent annual layer is located on the surface of the ice sheet, and the age of the ice increases the further down you go. We are interested in the late 1970s to present time frame because the satellite record we will use to look into the history of sea ice in the region begins in 1978. The present day "satellite era" proves extremely useful for studying earth's changing landscape; in particular, satellite images allow us to track the comings and goings of annual sea ice in the Arctic, and changes in the extent of the Greenland Ice Sheet.
Methanesulfonic acid (MSA) is one of the glaciochemical proxies we are interested in measuring in the core. MSA is a sulfur compound whose location and concentration in ice cores is dependent on the timing and size of the spring phytoplankton bloom. This phytoplankton bloom occurs when the upper ocean first sees sunlight as the winter sea ice melts and breaks up. MSA measured in the ice core and compared with the satellite sea ice record will allow us to understand how the extent and variability of sea ice in the region is expressed in the MSA stored in the ice sheet with every passing spring sea ice break up. After working out the relationship between MSA in the ice-core and sea ice in the region, we can extend what we know about regional sea ice extent and variability back in time before the satellite era by measuring MSA in deeper cores around 100 meters in length. In order to see the phytoplankton bloom proxy preserved in the ice core, you need to find ice caps close to the coast. And in order to sample these coastal ice caps, you need ideal helicopter conditions in one of the most fickle weather regions of Greenland.

Disko Island and the Nuussuaq Peninsula are two islands located off Greenland’s west coast in Disko Bugt, a region notorious for cloudy weather and low coastal fog. The islands are mountainous, with both Disko and Nuussuaq topped by ice caps that carved valleys down between mountain peaks and deposited moraines along the present-day coastlines. Today, the high-altitude peaks are still topped by ice caps. Ice coring fieldwork at these coastal regions happens between March’s short, cold days, and the onset of the summer melt season in May. A variable Disko Bugt sea ice break up date across April and May results in increased storminess and coastal fog in the region. In this project’s initial field season, we investigated multiple potential coring sites by taking relatively short 10-meter ice cores to determine the ideal locations for three deeper ice cores on the order of 100 meters in length, which we’ll return for next field season.

Sea ice break up in the Vaigat Strait, with the glacially carved valleys and high-altitude ice caps of Nuussuaq Peninsula visible in the background (Photo Laura Stevens)


Ideal conditions for flying and ice cap fieldwork are light winds, not too cold, and stable, clear, high skies. The helicopter pilot must maintain sight of the ground while flying, making cloud layers below the coring site altitude a consistent barrier to flying. If the field site is above a lower elevation cloud layer, the pilot may find a hole to punch up through the clouds only if the hole remains a viable portal to get back below the cloud layer. The pace of fieldwork contingent on weather windows and helicopter flights is similar to that of a mountaineering expedition: there are tedious stretches of standby and no-fly days spent organizing gear, preparing instruments, and watching the skies while constantly tuning a dizzying mix of logistics between pilots; science support staff; and chartered, commercial, and military aircraft, punctuated by single good weather days of furious activity on the ice.

Matt Bingham (Milton Academy) and Ben Smith (U. Washington) secure gear through a cloud of blown snow as the helicopter lands with the coring team at the Nuussuaq Peninsula site (Photo: Laura Stevens)


After spending two poor weather days in the small town of Qaarsut on the northern coast of the Nuussuaq Peninsula, we awoke to blue skies and a chance to get up to our first Nuussuaq Peninsula ice cap coring site, and the fourth coring site of the trip. Working within the weight constraints of the helicopter, our team of six split into a coring and radar team to divide up tasks and helicopter loads. The coring team was responsible for drilling the 10-meter ice core by hand-auger, and collecting discrete samples from a 2-meter snow pit, to build glaciochemistry and accumulation records. The top 2 meters of an ice core often doesn’t hold together well, since the snow at the ice sheet surface is less densely packed than the rest of the ice sheet below. Thus, sampling down the vertical wall of a snow pit ensures that the most recent portion of the record will be well measured. The radar team was responsible for completing radar surveys on foot towing radar equipment behind us on sleds. Radar surveys allow us to see what the annual layers of the ice sheet and the total depth of the ice sheet look like beneath our feet.

Members of the radar team on the first helicopter flight up to the proposed drilling site, we got the first view of the dome-shaped ice cap floating above cloud-shrouded lowlands. Following more than a few photographs, we quickly got to work setting up our rope team and the radar sleds as the helicopter returned to Qaarsut to ferry up the coring team. After probing the snow pit and ice core drilling locations to ensure there were no crevasses in the region, we roped up and set out on a concentric radar traverse moving out from the coring site at the top of the dome. The ice coring team arrived shortly after.

With frequent radio communication between the two teams, we knew the coring was going well, generating a visible record of annual layers alternating between light winter snow and summer ice lenses, with roughly three years present in each additional meter cored. The radar data depicted 150 meters of ice, confirming this Nuussuaq Peninsula site as a worthwhile candidate for drilling a deeper ice core next field season, and replacing memories of overcast hiatuses with sunny ice-capped peaks. Next steps are analyzing the 10-meter cores in the lab, and comparing the results with satellite image records of regional sea ice before heading back to Greenland next April.
For more day-to-day information on the trip, check out the fantastic blog (http://www.miltonacademy.info/science) and stream of photos (instagram.com/bingham_greenland) that Matt Bingham, a Milton Academy science teacher along for the expedition, updated throughout the trip.