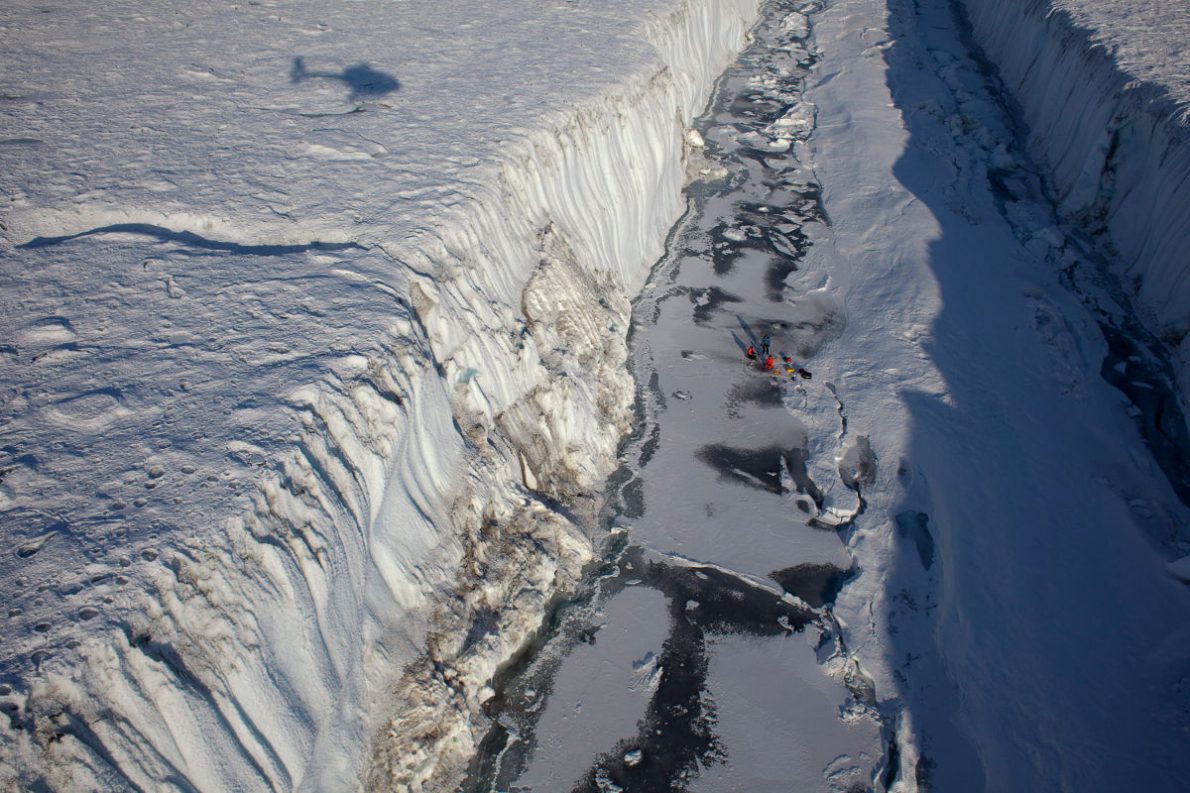 In northern Greenland, there’s a large region of ice that flows unusually quickly. Only discovered in the 1990s from studying satellite images, this feature is called the NorthEast Greenland Ice Stream (NEGIS). While typical speeds of the moving ice outside NEGIS are meters per year, NEGIS itself accelerates toward the coast, moving at hundreds and eventually over a thousand meters per year. 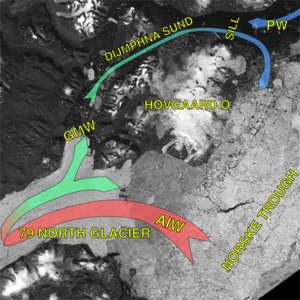 Nioghalvfjerdsfjorden is a deep fjord in northeastern Greenland. The name refers to its latitude and literally translates from Danish as “79 Fjord”. Owing to the difficulty of pronounincing “Nioghalvfjerdsfjorden”, many non-native Danish speakers refer to it and the nearby glacier simply as “79 North.”

79 North is one of the places that NEGIS reaches the ocean. When fast moving ice flows into the ocean, rather than breaking off it sometimes spreads over the water forming a semi-enclosed ice shelf cavity underneath a floating ice tongue. Once this happens, a large surface area of ice is in contact with the ocean and extensive melting can occur. How the resulting melt water influences the local ocean circulation and what controls the heat fluxes toward the glacier are difficult questions to answer. For 79 North, an additional complication is that there are actually two openings to the ice shelf cavity at 79 North: one from Dijmphna Sund to the north, and one to the south near Norske Trough1. There is very little bathymetrical data from the area, which makes it difficult to determine how water will flow around the cavity.

We recently published a paper2 that uses data collected from the MV Arctic Sunrise a few years ago to try to answer these questions. Glacial melt water leaves a distinctive signature in ocean water, partly because it’s very cold, but also because it’s very fresh compared to the ocean. By looking at nearby temperature and salinity measurements, Fiamma Straneo and I were able to infer the depths in the water column where different kinds of glacially modified water mix and drift away from the glacier. 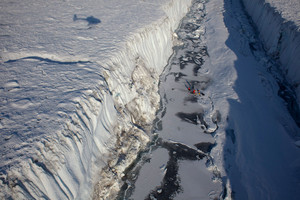 Furthermore, new data reveals a shallow topographic sill in Dijmphna Sund that likely impedes flow from the continental shelf to the ice shelf cavity. There is still very little data from the southern entrance, so we turn to hydrography to make educated guesses about the circulation pattern. In Dijmphna Sund, we find water that is more glacially-modified than we find in the cavity. This result leads us to believe that water must flow into the cavity from the south, and then out through Dijmphna Sund.

Finally, we made some rough estimates of how quickly the water in the cavity could be replaced by new water form the continental shelf. This is important because ocean heat from outside the fjord is required for submarine melting. To do this, we drew inspiration from the oceanography of estuaries. In an estuary, a fresh river flows into a brackish coastal body of water. The fresh water drives an overturning circulation by mixing with saltier and denser water while spreading buoyantly. The strength of the exchange flow at the estuary mouth can be estimated by knowing the salinity difference between the incoming and outgoing water and the volume of fresh water entering the estuary from the river.

A fjord is a type of estuary. In this case, we don’t really have a good estimate of the volume of water entering from the glacier because an unknown amount flows in beneath the glacier from NEGIS. We can, however, estimate how much melting occurs at the shelf based on surface flux divergence1,3. Using the thermodynamics of melting, we applied a temperature-based analogue to the estuarine equation. What we found is that the entire ice shelf cavity volume could be replaced in under a year. This means that we expect the properties of the water in the cavity, and therefore the melt rates, to track variability on annual to interannual timescales.

There’s still a lot of work to be done. What I’m working on now is understanding exactly how ocean variability affects the the ice tongue, and searching for observational evidence for it. As more data becomes available in the near future, we’ll be able test these ideas further.