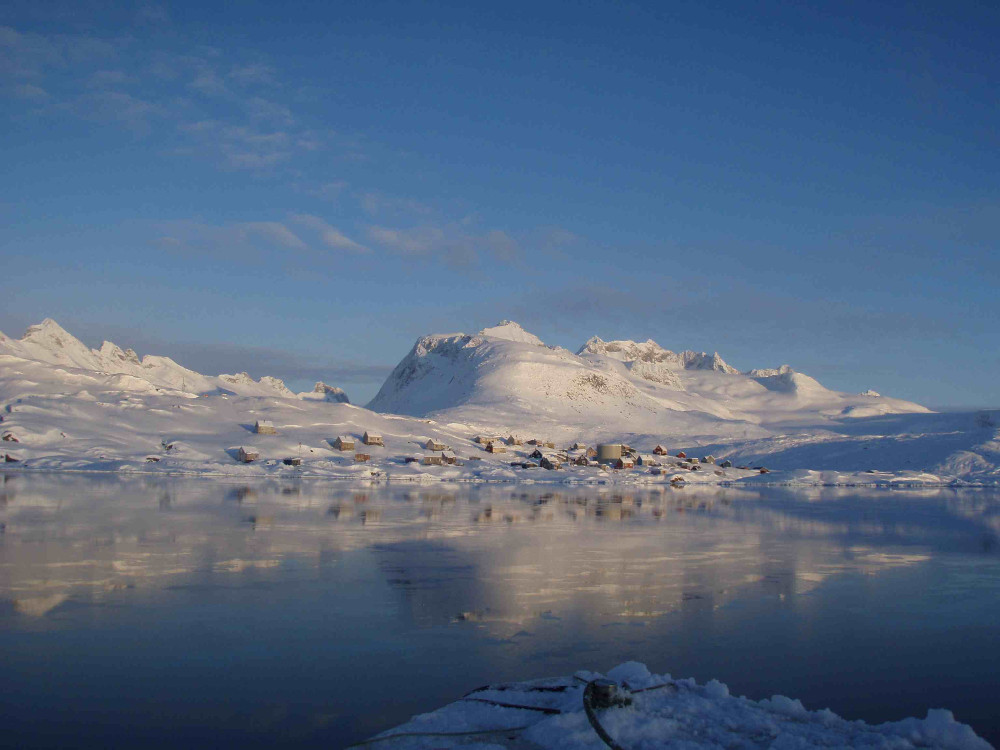 Even though I was staring at him when he pulled the trigger, the shot from Ignatius’ rifle made me jump. The bang echoed through the fjord, off exposed rock and drifting icebergs covered in feet of winter snow. Missed. Ignatius tried two more times to catch food for his family and his dogs, but the seal was faster, ducking swiftly under the floating ice. Finally, he gave up and turned the small boat towards the spot in the fjord I indicated.

At 3:47pm on March 15, 2010, we finally lowered an instrument into the 1800’ deep waters, marking the first time, to my knowledge, anyone had measured the temperature of waters lapping at the edge of one of Greenland’s largest glaciers in winter. Some 40 miles deeper into the fjord (a region that is inaccessible by boat) the 2000-foot-thick, four-mile-wide Helheim Glacier plunged into the waters of Sermilik Fjord on the southeast coast of Greenland, shedding huge icebergs (some 1 mile long and 1/3 mile thick) into the water with sudden and unexpected fury. I could only dream of sampling there, but just a few days ago, even today’s measurements were nothing more than a rapidly fading dream.
Just the thought of the data I was now gathering swept all doubts from my head of whether this mission had been a good idea. The first time I tried was in February. Jim, a senior technician, and I made it as far as Iceland before our flight to Greenland was cancelled due to bad weather. “Come back in a week,” we were told. “we may be able to fly then.”
We went back home and for the month that followed, I watched storm after storm sweep across Atlantic and hammer East Greenland. At the beginning of March, the forecast showed a window of opportunity. I quickly made arrangements to leave for Greenland on March 9th. That morning, Jim called me to say he could not come because of a sudden, nasty bug. Luck came in the form a post-doc, with plenty of field experience and a passion for Greenland. A few hours later, Kjetil and I left for Iceland.
We landed in Tasiilaq on March 10th. Plan A was to charter a helicopter the next day and drop expendable probes through open leads (cracks) in the ice along the length of the fjord from the Glacier to continental shelf. Plan A did not work. For the next four days, every morning we eagerly went to the two-room heliport and waited for our turn. Between the short daylight hours, bad weather and supply runs to the nearby villages, however, our turn never came. On the afternoon of the 13th, we were told that the helicopter had to go in for some unforeseen maintenance. “Come back the afternoon of the 16th.” Kjetil, a stoic Norwegian, threw me a concerned look. Time was ticking, our budget was limited, and we had agreed we would turn back on the 17th.
Since it seemed unlikely we would be able to fly on the 16th we switched to Plan B. This involved traveling via land to the tiny village of Tiniteqilaaq (‘Tinit’), which sits in the middle of the fjord, and heading into the fjord with one of the local fishing boats. Plan B was tricky (which is why it wasn’t Plan A). There are no roads into Tinit. Winter access is via dogsled or snowmobile over several mountains and a glacier. We also weren’t sure there would be any boats in the water (the fjord was mostly frozen). Not to mention the weather. But as seems to happen often in Greenland, if you say you have to do something the Greenlanders will find a way. Saying ‘no’ is really not part of their culture.
The morning of the 14th, Ignatius and Tobias picked us up with two large snowmobiles towing sleds for gear and instruments. Kjetil and I donned our survival suits (we are oceanographers after all), improvised gaiters and two giant pairs of goggles we found at the local supermarket. After six hours of sinking, flipping and digging the snowmobiles out of thick, wet snow, we turned back without getting anywhere near Tinit. “No problem” said Ignatius “We try tomorrow morning at 6, when it is cold”. Cold, crusty snow supported us better and after six hours of limited sinking and climbing some slopes that the snowmobiles refused to carry us up, we crested the small glacier above Tinit. A postcard-perfect picture lay beneath us. A stream of open water branched from the colorful houses of Tinit towards the fjord; 10 small boats were ‘parked’ on sea-ice at its edge. Less perfect was the fact that the boats were covered by several feet of snow. “No problem” meant shoveling Ignatius’ boat out. At 3:00 pm, Ignatius turned on the engine, and we headed for the middle of the fjord. That’s when he spotted the seal. At 6:00 pm, after dipping our instrument to the fjord’s depths 4 times and briefly warming up with hot tea in Ignatius’ house, we headed back to Tasiilaq in the dark, with only the headlights of the snowmobiles to guide us. Sometimes you just have to trust that the folks who live here know what they are doing. Ignatius picked a different route (the route we had taken in was too steep in parts to return on) and, with only about 200 feet of visibility through the snow-covered terrain, got us back into town four hours later. It was a beautiful, bitter cold, cloudless night. Cold means crusty snow though. And crusty snow means little sinking.

Helicopter mission over Sermilik Fjord on the last day!

By some miracle, the next day we managed to get out on the helicopter, and collect six more profiles throughout the fjord. All we had was a snapshot of conditions beneath the surface, but that’s much more than we had before. Why were we trying to get these measurements? We are working to understand why many of Greenland’s glaciers suddenly started retreating about 15 years ago and whether the warming of the ocean around Greenland has anything to do it [1]. Data we had collected in the fjord during the previous two summers had shown that its bottom half was filled with warm, salty waters coming from the tropics [2]. Now we were here to determine if these warm waters were also present in winter. We found that they were, and infact that they were warmer in winter than in summer [3]. In the end, we made one tiny step forward towards understanding how ocean and ice sheets interact and what this means for a warming climate [4]. And the reason we were able to do our science is because we followed the lead of the locals in being patient, trusting our luck, and letting them show us the way.