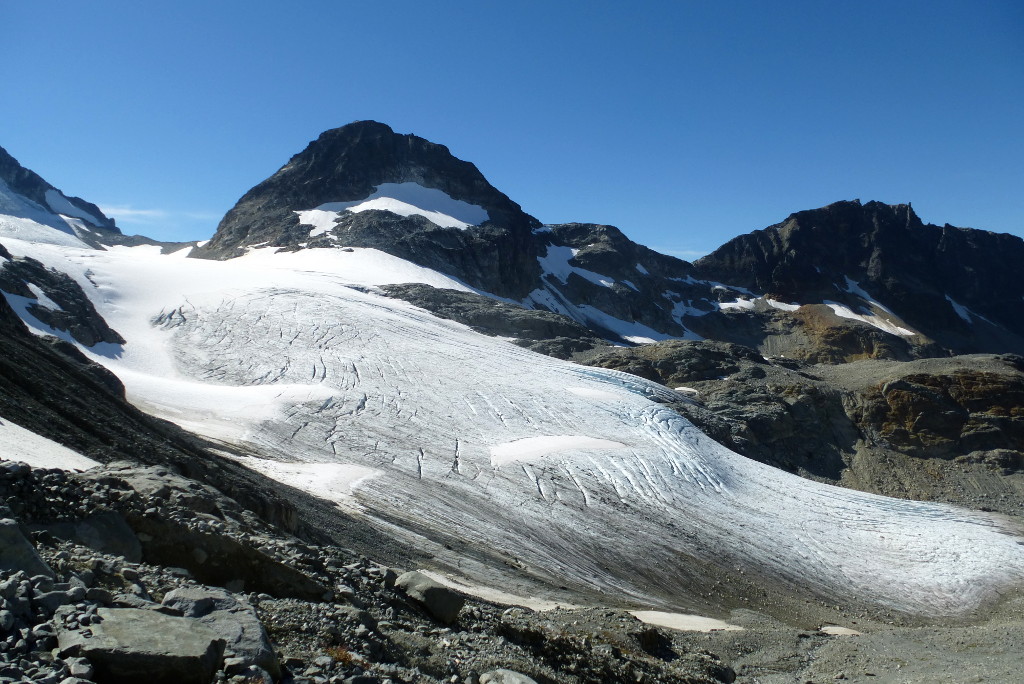 I'm one of the newer members of the Greenland fjords research group at Woods Hole, having just arrived last September. Before that, I did a variety of glacier-related work, including research on glacier thermal structure at Simon Fraser University, in British Columbia.
People's response to this varies; glaciers aren't a part of most folks everyday experience, and they might be surprised to consider that glaciers have a thermal structure worth studying. Indeed, the maximum temperature of a glacier is pretty well-constrained by the freezing point of water, above which it stops being a river of ice, and just becomes a river. Below the melting point, there are some interesting patterns that may form, with different glaciers being different temperatures1, a single glacier varying in different places2, and a single glacier changing temperature over time3. An added twist is that glaciers may be at the freezing point, which allows them to contain some amount of liquid water, trapped in the ice. This water content can vary in the same ways as temperature in colder ice, and may be derived from sources such as friction within the ice or melt water captured in snow and firn near the surface. The distribution of water inside the glacier is meaningful as an indicator of climate, glacier dynamics, and the history of glacier changes. One implication is that climate regimes exist in which the water content of the ice is controlled primarily by captured melt water at high elevations (it just runs off at lower elevations, where the snow melts every year). A counter-intuitive result is that as less and less snow is preserved through the summer at high elevations, less water may be captured, and less latent heat stored. In the end, some glaciers may end up retaining less heat, even as the climate gets warmer.
This seems to be the way that a lot of things in nature and in polar science work. There are properties, whether they’re glacier water content, the isotopic compositions of snow, or fjord density variations, that we can observe and which, if we’re lucky, we can find meaning in. A lot of these things aren’t the obvious or direct path to answering our questions about the world; if we’re concerned about changing climate, we might restrict ourselves to time series and models of Earth’s temperature (which are still incredibly important). But unless we look at some of the less obvious processes and interactions, such as how different parts of the climate system interact, we risk missing out on important sources of knowledge.